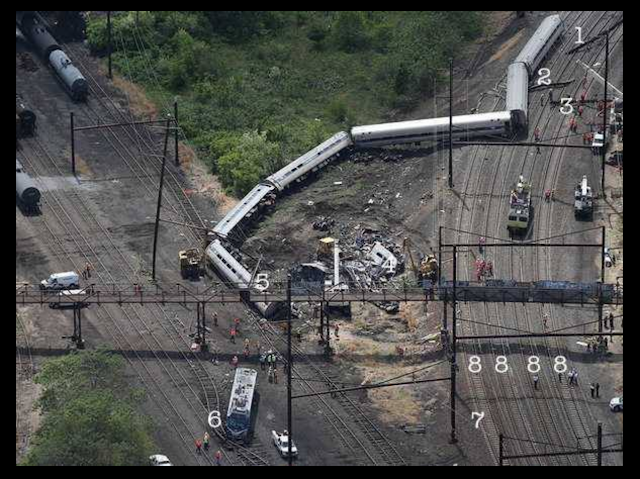 Here is a photo of the Amtrak derailment at the Frankford Junction curve in Philadelphia. (Click on photo to see the whole image.)  Numbers 1, 2 and 3 identify parts of the fractured structural steel beam broken by the derailing train colliding with it as it passed. 4 (center of the photo) identifies the crumpled and mangled remains of the first car behind the locomotive. Notation 4 is in the center of the folded car with cranes to the left and right. 5 is the second car of the remaining six car string. The specially designed passenger car couplers did their job for the six cars as the cars did not separate. Had they  been connected with freight couplers the cars would have parted. Since about 1910 USA passenger cars have been designed for the frame to withstand 800,000 pounds of buff force. No other country has such a standard. 6 is the locomotive. Its right side headlight was damaged. 7 is the outside rail on the curve. It is higher than the inside rail opposite. That is referred to as the super elevated curve. Super elevation allows for faster speed through a curve like a race car track. The curve wason an 1850's alignment rated at 50 miles per hour by the original owner and builder, the Pennsylvania Railroad. The current owner, Amtrak also has a 50 mile per hour speed restriction on the curve. The steel beam above and across the tracks at 8 suspends an electric wire above each track. A spring loaded device on the locomotive with a roller at the top contacts the wire and collects electric power to propel the electric motors driving the locomotive. The wires and steel beam supports are called catenary. I think that the locomotive grazed the catenary support enough for the first car to fully collide and fold. The locomotive separated and came to rest at 6. The first car was pushed by the following cars to 4. As soon as the air brake line was severed from the locomotive the string of cars brakes activated explaining why the last two remained upright as the energy of the cars dissipated . Centrifugal force took the equipment to the right on a left curve.