Why Can't the United States Build a High-Speed Rail System?

Why Can't the United States Build a High-Speed Rail System?

Will High Speed Rail Ever Happen?

If a political party of NO exists and that same party does not KNOW; what are the chances?

Here is an April 1956 article from the Pennsylvania Railroad employee magazine, Pennsy. It describes a new 7 and 1/2 hour schedule between Pittsburgh and New York city using a light weight, low center of gravity design by General Motors. It was called the Aerotrain. The passenger cars used components from intercity GM buses. The experiment lasted about two years. It is unclear why it was abandoned. The Aerotrain was reportedly noisy. The segmented, jointed rails would have contributed to the migration of noise into the passenger cars. The locomotive made more noise than conventional passenger diesel locomotives. Early on suspension adjustments were required that the New York Times reported was an effort to lessen "shake, rattle and rule." Or, maybe it was simply the flight from intercity passnger trains to private automobiles that was then underway. The schedule was as fast as the schedule for the famed Broadway Limited all pullman passnger trai at 7 and 1/2 hours. 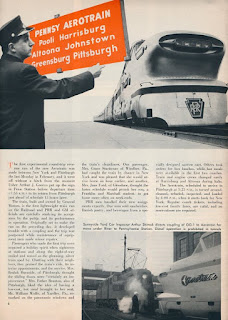 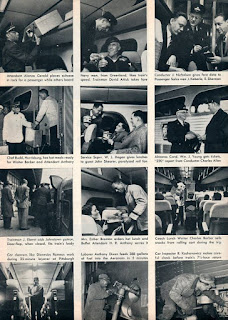 An eastbound Aerotrain at the Juniata Works, PRR locomotive and rolling stock repair facility, about two miles from the Altoona passenger station: 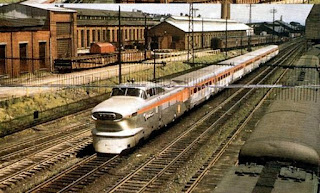 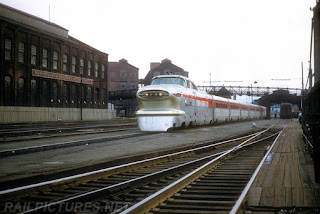 Westbound Aerotrain a few miles west of the Altoona passenger adjacent to a signal tower called "Slope" as this was near the base of the slope or grade over the Allegheny frontal through the Horseshoe Curve to top of the grade at Gallitzin, PA: 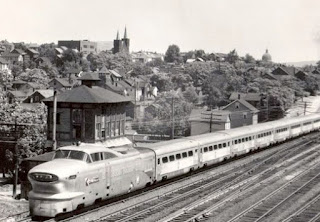 Posted by Samuel C. Walker at 7:56 PM No comments: