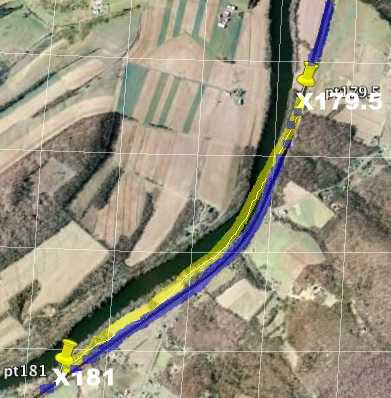 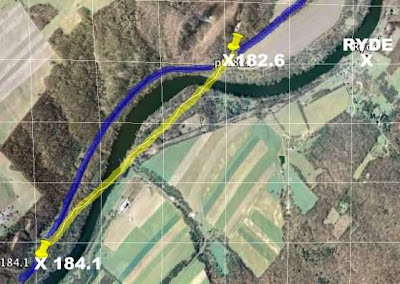 The Norfolk Southern line in blue has a 79 mph speed limit approaching milepost 184.1. The passenger speed becomes 65 mph to milepost 183.1 where it is further reduced to 40 mph.  At milepost 182.6 the allowable speed then becomes 79 mph again. The proposed realignment in yellow would full operational speed without a reduction.
Posted by Samuel C. Walker at 3:54 PM No comments: 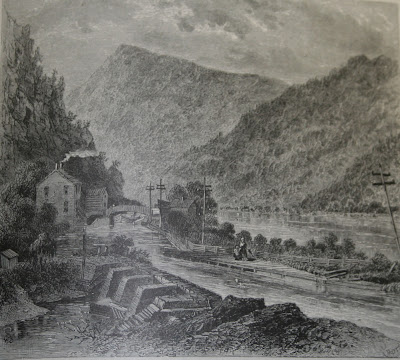 East of Huntingdon, PA, the Pennsylvania Canal in foreground crosses Standing Stone Creek. The Juniata River is in distance. The artist is looking east. Circa 1840 before the construction of the Pennsylvania Railroad line now owned by the Norfolk Southern Company. 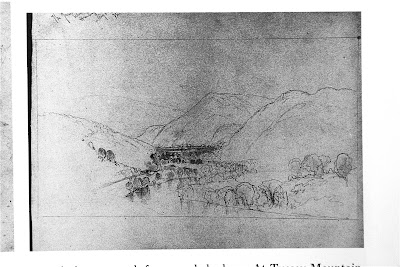 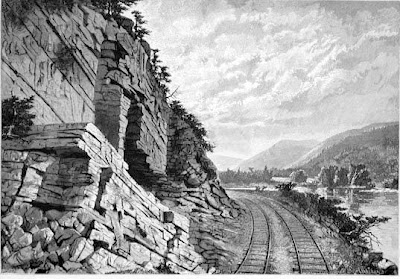 East of Huntingdon, PA,  looking east circa 1860 on the Pennsylvania Railroad line now owned by the Norfolk Southern Company. Seen is the Juniata River. 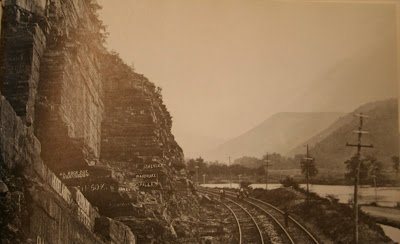 This photograph east of Huntingdon, PA, circa 1870, shows the Pennsylvania Canal and tow path in the right hand corner of the image. The larger body of water is the Juniata River. 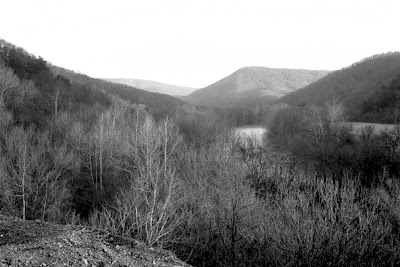 East of Huntingdon, PA, from Route 22 looking east in 2005.  The Norfolk Southern line on its original Pennsylvania Railroad 1850's alignment is seen through the brush at lower right. 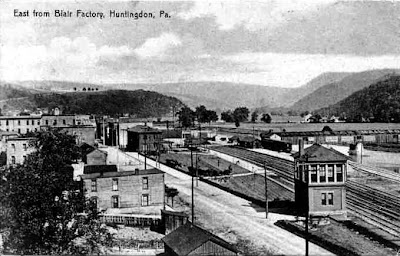 Looking east from the Blair factory building. The now preserved Huntingdon signal tower is in the right lower corner of the circa 1920 view. Both the passenger stations for the Pennsylvania Railroad and the Huntingdon Broad Top Mountain Railroad are in the center of the image. The Juniata River is to the right.
Posted by Samuel C. Walker at 2:29 PM No comments: 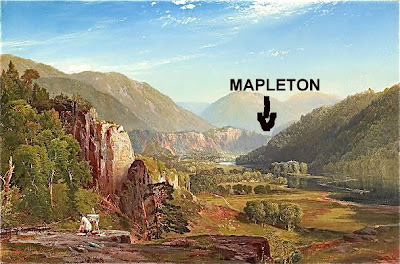 Artist Thomas Moran in 1864 created this landscape of the Juniata Valley in the vicinity of Mill Creek, PA,  looking east. The Juniata River is to the right.  Mapleton, PA is behind the rocky ridge. The gap in the distance beyond Mapleton is Jack's mountain.  The mountain to the right is the northernmost point of Sidling Hill. In the painting now part of the National Gallery, the railroad is not shown. 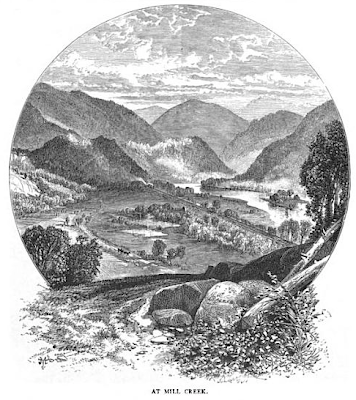 Here is a woodcut done by Thomas Moran published in the 1875, "Pennsylvania Railroad: Its Origin, Construction, Condition and Connections," by William B. Sipes. Note in the lower left corner the Moran monogram of a capital M over a capital T.  Here, the Pennsylvania Railroad right of way now owned by the Norfolk Southern Company is clearly shown. The line is today on the same right of way. The landscape is set in the vicinity of Mill Creek, PA looking east and downstream of the Juniata River looking towards Mapleton, PA. 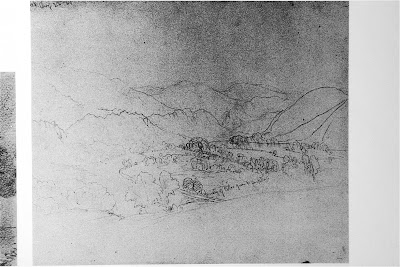 The landscape at Mill Creek from Thomas Moran's sketchbook circa 1870. 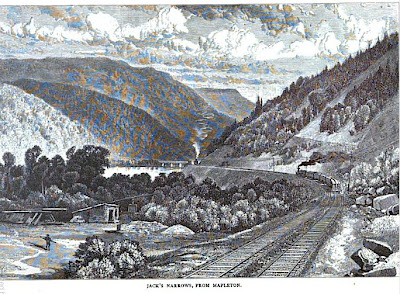 From the 1875 "Pennsylvania Railroad" by Sipes, a woodcut view from Mapleton, PA looks east toward the Pennsylvania Mainline Canal crossing the Juniata River from the south bank to the north bank. This view is near milepost 193.5.

Photograph circa 1870 of the aqueduct carrying the Pennsylvania Canal from the Juniata River's south bank to its north bank below Mapleton, PA. This is the entrance to Jack's Narrows of the Juniata River as the river flows through a gap in Jack's Mountain.
L 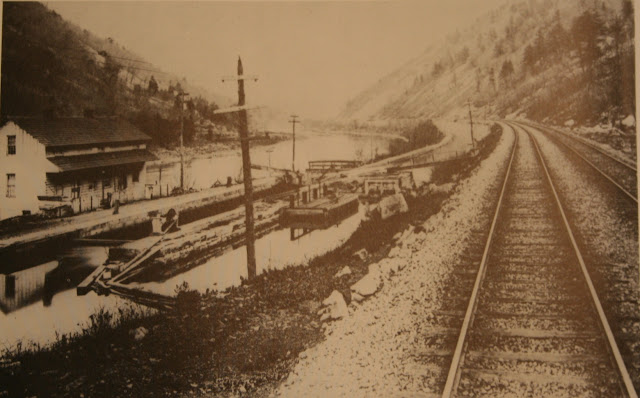 Looking east within Jack's Narrows below Mapleton, PA two canal boats are being prepared to be lowered in a lock. Circa 1860. 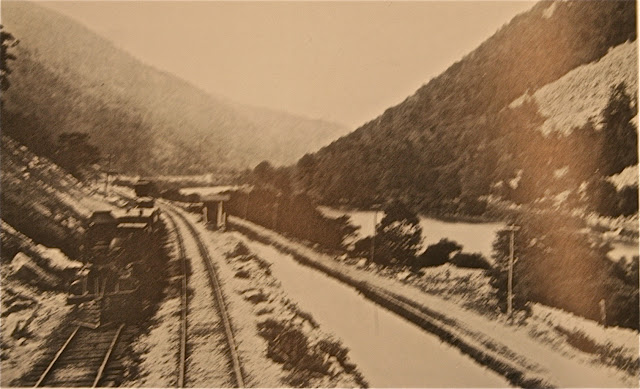 Looking upstream and west towards Mapleton, PA, from within Jack's Narrows of the Juniata River Valley circa 1860. The curve to the left then as now is 1.5 degrees tightening to 2.3 degrees changing to a 2.6 degree cure right in the distance. The passenger speed today is limited to 60 mph on the right of way built in the 1850's. The proposed realignment permitting a speed of 80 mph would cut through the mountain to the left. This was near today's milepost 192.5. 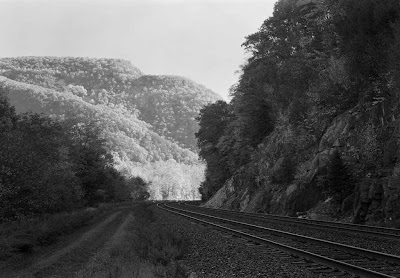 A recent photograph looking east near milepost 192.5. This photograph was posted on http://michaelfroio.wordpress.com/2011/09/09/jacks-narrows/.  Photographer Froio captured some of the essence of being within Jack's Narrows. The access road to the left shows where two of the former Pennsylvania Railroad mainline tracks once existed. The four track mainline was given the name, "broadway." When the "broadway" existed two tracks were designated for passenger service and two tracks were designated for freight service. The tracks were signalled in one direction only. In the 1950's when passenger service peaked and then declined, 50 east - west daily passenger  trains operated past this point between Pittsburgh and Harrisburg. Today the two remaining tracks have bi-directional signalling. 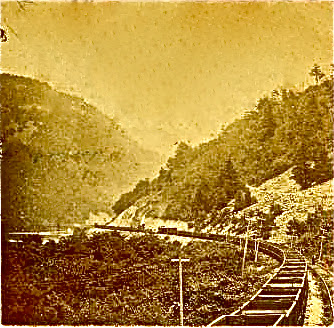 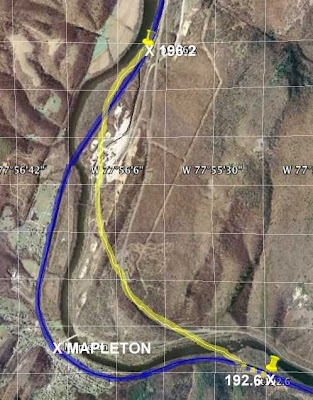 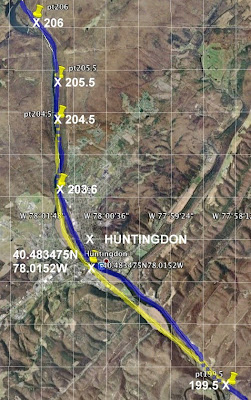 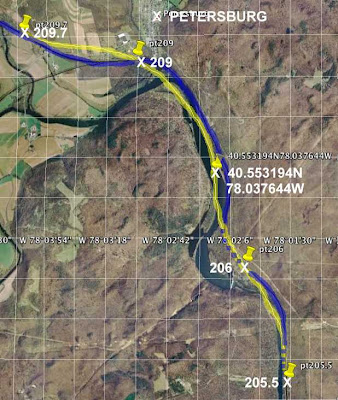 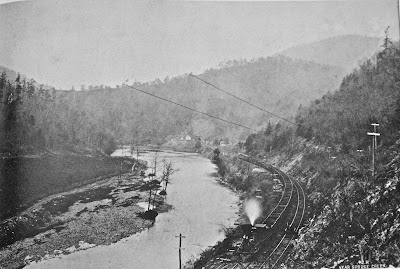 This photograph is circa 1865 and looks east with the Juniata River in the center of the image. A westbound freight train is seen in the right foreground on a 2.9 degree curve.  Out of the photo's frame to the left is the confluence of Spruce Creek with the Juniata River. The Juniata River is flowing downstream to the left cutting a passage through the Tussey Mountain. The Pennsylvania Railroad constructed the Spruce Creek tunnel through the barrier in the middle distance. The tunnel portal is today located at milepost 213.8 ( 40.600889N78.128058W). Note the two telegraph wires in the immediate foreground to the poles to the right. Telegraph communication were then an integral part of railroad operations. 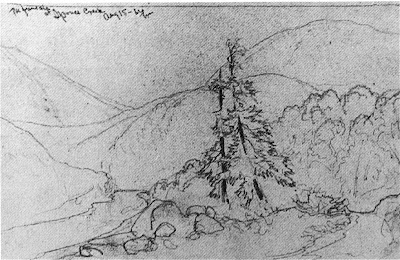 Famed artist Thomas Moran sketched the Juniata River Valley at Spruce Creek in the 1870's This is roughly the same perspective as the photograph above. 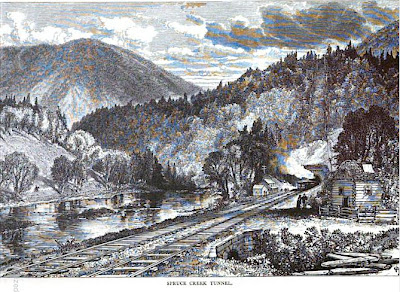 The perspective in this 1875 woodcut is closer to the Spruce Creek Tunnel at trackside. The Juniata River flows eastward to the left through a narrow and steep gap in Tussey Mountain. 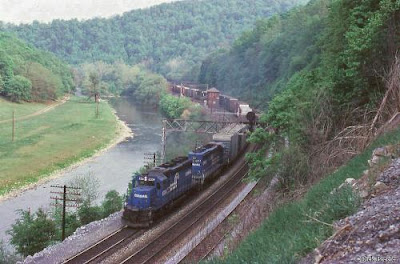 This photo shows a train on the Pittsburgh to Harrisburg line at Spruce Creek when  it was owned and operated circa 1985 by the Consolidated Railroad Corporation, Conrail. The train is on the 1850's alignment of a 2.9 degree curve. The freight speed limit is 35 mph and the passenger speed limit is 40 mph. The brick signal tower in the middle distance was built after 1936 flooding that undercut the frame tower that preceded it. There is an inch to spare between the right of way and the location of the tower. No tower exists at this location today as the signaling system no longer is labor intensive. 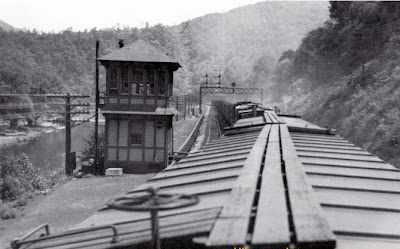 This perspective is from the top of a boxcar circa 1930 at the Spruce Creek signal tower looking east toward the Spruce Creek tunnel. The Juniata River is to the left. The signal operator in the tower is in constant communication on an open telephone line to the signal operator in the tower to the east and west of his location. Signal towers were located roughly at 10 mile intervals from New York to Pittsburgh then from Pittsburgh to Chicago or Pittsburgh to St. Louis every ten miles on the Pennsylvania Railroad. The signal and telephone system used open copper lines strung alongside the right of way on poles with multiple cross arms as seen to the left of the tower. 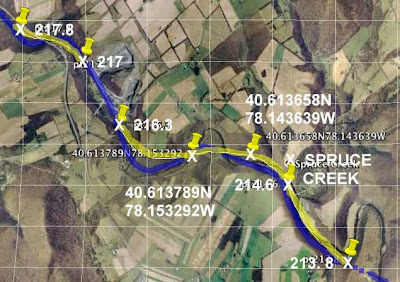 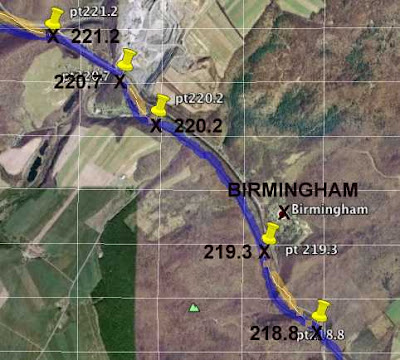 The Pittsburgh to Harrisburg line at Tyrone, PA has such a severe curve (5.6 degree) entering the Juniata River Valley near the Bald Eagle Mountain that the passenger speed is 40 mph. This point is another chokepoint. The existing line is in blue. At milepost 221.2 (40.6643N78.223883W) a realignment in yellow as a tangent to 40.667478N78.232181W could be the point for a 2 degree curve allowing an 80 mph speed  to milepost 222.2 or a 1 degree curve in orange allowing 110 mph speed to 40.666506N78.244739W being the starting point for the proposed new line over the Allegheny frontal from Cresson, PA to Tyrone, PA. The 2 degree curve would be the alternative alignment continuing to operate with the antiquated Horseshoe Curve over the Allegheny frontal.
Posted by Samuel C. Walker at 9:11 AM No comments: 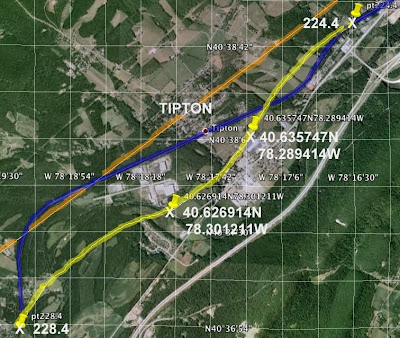 Assuming that the proposed Horseshoe Curve bypass is not built, an opportunity to lessen curvature in the vicinity of milepost 224.4 (40.647808N78.274844W) to milepost 228.4 (40.614131N78.322361W) near Tipton, PA between Bellwood and Tyrone, PA exists. Admittedly, if the curvature were eased at Tyrone as proposed, the nearness to Altoona would make this proposal something that could be ignored. At any rate, the curvature in this area requires a reduction in allowable speed westbound from 65 mph to 60 mph then returning to 70 mph. The existing NS line is in blue. A 1 degree reverse curve could sustain a 110 mph speed as shown by the yellow line. The orange line represents the location of the proposed crossing of the Allegheny frontal from Tyrone to Cresson. The white line to the right is Interstate 99.
Posted by Samuel C. Walker at 6:23 PM No comments: