The Kink or the Horseshoe Curve

On August 13, 2012 the Norfolk Southern Railroad operated a special train with a steam locomotive westbound over the Horseshoe Curve. Here is a video of the Horseshoe Curve trip made from an open door of a following baggage car. Here is the video link:

At 0:09 seconds the locomotive is above Bakers Run at milepost 241.7. This is a 9.0 degree curve with a 4 inch right rail elevation. The speed limit has changed from 35 mph to 30 mph for freight and 44 mph for passenger trains on the Horseshoe Curve. The degree of climb is 1.34.

At 0:44 seconds the public observation area with many onlookers is seen. A PRR GP9 locomotive is on display representing the first fleet of diesel locomotives that replaced steam locomotives in the early 1950's.

At 1:47 the steam locomotive ahead is nearly at the end of the 9.4 degree curve. The degree of climb increases to 1.76.

Then there was the sound. The locomotive had both its nickle plate whistle and a PRR whistle. The second sounding of the whistle as the train passed the observation area was the higher pitched scream of the PRR whistle. Add to the sound its amplification off the rock face to the right and the giant amphiteater that is the Horseshoe Curve was demonstrated.

What the sound of a steam locomotive working against a steep grade and severe curvature demonstrates is how the 1850's civil engineering of the Horseshoe curve is a kink in the Pittsburgh to Harrisburg line.

Compare photographs of a steam powered passenger train operated by Conrail in October of 1976 over the Horseshoe Curve. Conrail had been formed from bankrupt railroad companies in April of 1976. Its principle component was the Penn Central Railroad Company which had earlier been the product of a merger between the Pennsylvania Railroad and the New York Central Railroad.

Seen below and expressed by the large cloud of white steam is the point where the steam locomotive lost traction and wheels spun wildly as the engineer cut the throttle in order to regain traction. This is at about 0:25  on the video. 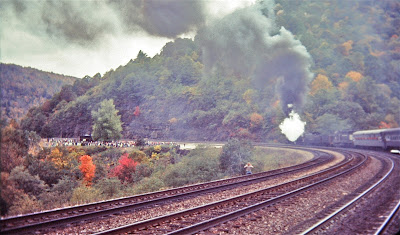 This photograph portrays  the position of the train in the video at 0:33. 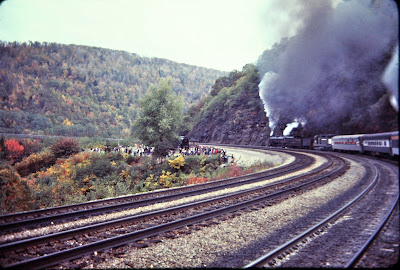 In 1957 the steam locomotive to the left was put on static display. It was a PRR steam locomotive built at Altoona's Juniata Shops. It was part of the 435 K4 type passenger locomotives built. The K4 was removed from static display in 1986 and returned to operating status in 1987 for a brief period of time. It is now located at the Railroaders Memorial Museum at Altoona, PA. 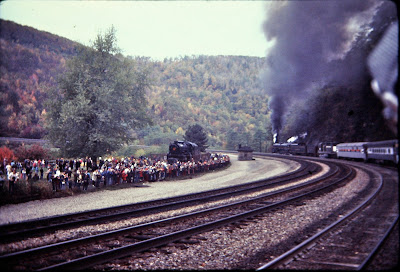 The location of the locomotive in the photograph below is at 1:38 in the video. The steam locomotive has again lost its footing and the enigneer is in the process of regaining traction. The lazy plume of smoke is indicative of the slow speed near a walk as the smoke plume is being blown forward.

Note that in 1976 there were four tracks over the Horseshoe Curve. The track second from left was lifted by Conrail and the materials recycled for use elsewhere. The ballast is fouled and the ties are covered with stone. That was the result of deferred maintenance. The blackened area on the stone ballast shows the result of friction wheel bearings. In 1976 a substantial portion of the freight car fleet had wheel sets with friction bearings. The axle ends rested in an enclosure with a pool of oil. The decades long conversion of the freight car fleet to roller bearings was just beginning. 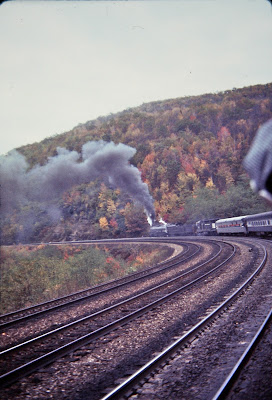 Here the photograph is at 1:38 in the video. The 1976 trip was a struggle for the steam locomotive and diesel used then. The operation shown in the video was anything like that in 1976. 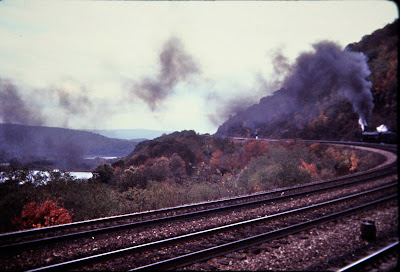 Posted by Samuel C. Walker at 7:24 PM No comments: