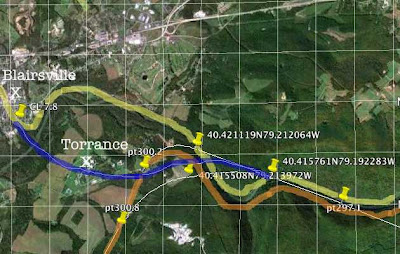 Posted by Samuel C. Walker at 5:45 PM No comments:

The proposed realignment would permit 80 mph. The realignment is in yelloww. The existing line is in blue. 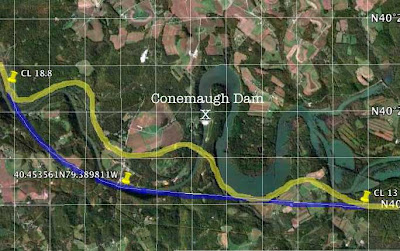 Posted by Samuel C. Walker at 5:32 PM No comments:

The proposed line relocation near Avonmore and Saltsburg will allow 80 mph with curvature lessened to 2 degrees. 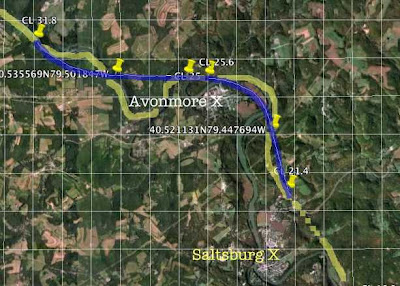 Posted by Samuel C. Walker at 6:47 AM No comments:

Proposed in blue is further realignment of the Conemaugh Line in the vicinity of Vandergrift, PA.  Vandergrift was a town named for Jacob J. Vandergrift, a major investor in the Apollo Iron Manufacturing Company located there. Vandergrift owned the steamboat Red Fox which was the first to serve the world's first oilfield loading crude petroleum at Oil City in 1861. His enterprises later included pipelines and a refinery at Oil City. The 6 degree curve through Vandergrift requires a 35 mph limitation. The proposed realignment would permit 110 mph. 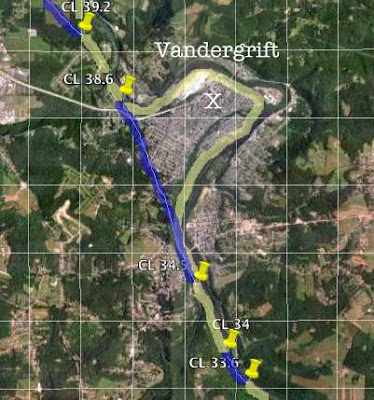 Posted by Samuel C. Walker at 6:34 AM No comments:

The Conemaugh Line at Leechburg, PA confronts severe curvature and worse at Hyde, PA. Shown is suggested realignment capable of 110 mph. The original curve built at Hyde, PA is a tight 7 degree curve requiring a 30 mph speed. As the line was built in 1865, it logically followed the Conemaugh River as a path of least resistance. There is only so much that could be done with manpower, horsepower and blasting powder. In 1865 the Pennsylvania Canal was on the north side of the Conemaugh River so the railroad followed the south side of the River.The existing line is in yellow and the proposed new alignment is in blue. CL indicates milepost designations on the Conemaugh Line. 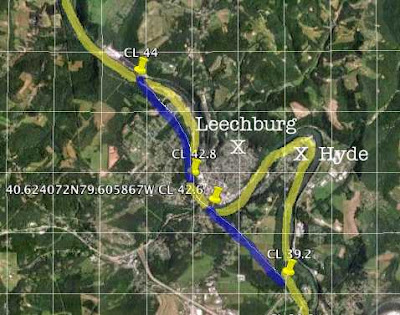 Posted by Samuel C. Walker at 5:49 AM No comments:

The severe curvature in the vicinity of Freeport, PA on the Conemaugh Line could be reduced to 2 degree curvature allowing a maximum 80 mph speed. Reducing curvature and restoring the second track would allow for future freight capacity. It would eliminate the slow and circuitous routing of freight over the Port Perry Branch to the Mon Branch. Increasing speed and track capacity on the Conemaugh Line would overcome the conflict between increased passenger service and the crossing of slower freight trains to and from the mainline at Milepost 339.5 in the vicinity of Wildmerding for access to the Port Perry Branch. The Conemaugh Line has a favorable ruling grade. 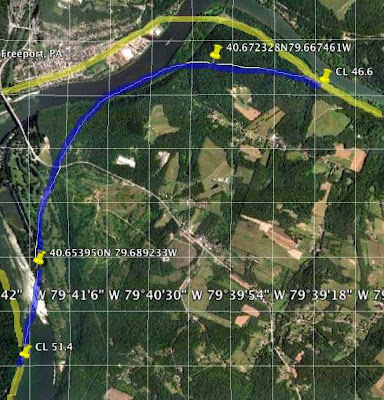 The existing line in yellow supports a 30 mph freight speed. The curvature approaching Freeport and through Kiski Junction to milepost 46.6 varies from 4 to 3.5 degrees. Rebuilding the line in blue would be the equivalent to a 2 degree curve capable of 80 mph.
Posted by Samuel C. Walker at 4:40 PM 1 comment:

Later the line became absorbed into the Pennsylvania Railroad and  became known as the Conemaugh line. It became an alternative freight line to Pittsburgh. The Pennsylvania Railroad operated no scheduled passenger service on the line east of Freeport. If a passenger were operated across the line it would have been a special excursion. Or, the passenger train may have been a special operation routed over the Conemaugh Line in order to avoid an operational problem on the mainline such as a rerailment. There was no scheduled passenger service over the line.

The Conemaugh line has a ruling grade of only .04 per cent. From that standpoint, it has a more favorable ruling grade than the mainline from Pittsburgh to Bolivar, PA.

The length of the Conemaugh Line from its connection with the mainline at the Northside of Pittsburgh at Federal Street to Bolivar is 78 miles. The distance from the Pittsburgh Amtrak Station to Bolivar is 59 miles.

Shown is the connection with the mainline in blue with the Conemaugh Line ( yellow) at federal Street on the Northside of Pittsburgh. The Pittsburgh Amtrak Station (MP 353) is in the lower right hand corner. 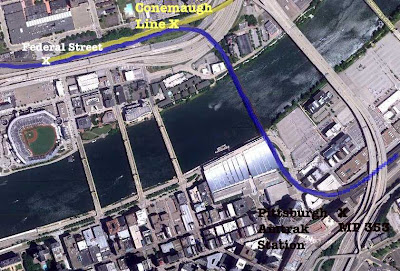 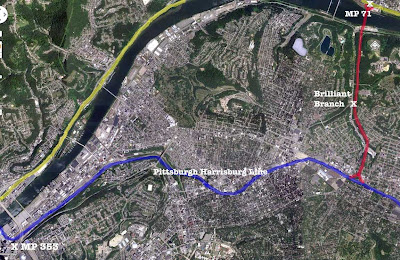 The Aspinwall, PA connection with the Conemaugh Line in greater detail: 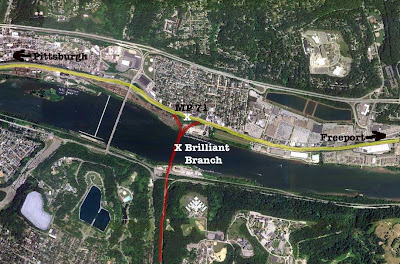 Shown is the Conemaugh Line (yellow) crossing the Allegheny River at Freeport to the once active Kiski Junction as it proceeds up the Kiskiminetas River. 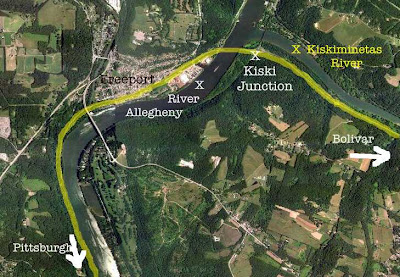