Some Thoughts About Electrification

The Keystone Corridor East, Harrisburg to Philadelphia is electrified. That it is electrified allows for an the integration and utilization of Amtrak equipment used on the Northeast Corridor.

What would happen if the American freight railroad system were electrified? How would electrification of the Keystone Corridor West benefit the restoration of passenger rail service Pittsburgh to Harrisburg?

Our oil based transportation system is a substantial problem to the country’s defense and preparedness. An elegant solution is to create a parallel non-oil based transportation system using proven, decades old technology. Such a system would be based upon electrifying the American freight railroad system. That is something better than what the country has. Until it is created, we will remain on an oil based treadmill.

First, electrifying the American freight railroads would create a transport system not vulnerable to interruptions of oil supply.

Second, in the event of months or years long interruptions, an electrified non-oil based transportation system would allow the American economy to function.

Third, electrifying the freight railroads would increase their capacity and their line haul speed capability.

Fourth, an electrified railroad will use remarkably less BTU’s to do the same transportation function as the oil based transportation system. That would translate into lower costs for freight and passenger transport service.

(Note: The proposal to create a national defense, non-oil based transportation system by electrifying the freight railroads can be found at  www.millenium-institute.org/projects/region/na/usa/rail.html )

When consideration is given to the self evident national defense defect caused by the oil based transportation, that by itself is argument enough to undertake the electrification project. While there have not been months long interruptions to oil supply for decades, the probability for an interruption continues. The interruption might not be by a government’s hostile action but by worldwide competition for oil resources. Or, a severe hurricane in the Gulf of Mexico could create the bottleneck. Whatever way our oil supply might be impaired, our reliance upon an oil based transportation system is nonsensical.

It is anticipated that the American freight railroad system will begin to develop bottlenecks by 2020. If nothing is done to increase capacity, by 2035 there will be severe problems in operating the freight railroads. The rule of thumb is that electrification creates a 15% increase in railroad capacity. It is accomplished by faster operating speeds and a more effective braking ability.

With electrification, freight speeds would then be compatible with passenger speeds. What does this mean? In 2004 the BNSF Railroad and the CSX Railroad attempted to operate a higher speed intermodal service for United Parcel Service Company, from coast to coast. The service was to be operated at passenger train speed. The upshot in 2004 was that with current freight train density, the addition of a higher speed train adversely affected normal freight operations. The best efforts of BNSF and CSX together with existing freight density could not avoid an operational quagmire for those companies. The UPS service had to be abandoned.

Another example of the difficulty to restore rail passenger service are the findings of the 2003 Woodside Consulting Company’s study for the NS Corporation and PennDOT for additional passenger trains between Pittsburgh and Harrisburg, the Keystone Corridor West. The study found that in order not to interfere with an average 104 freight trains a day, and to accommodate 3 additional trains, 6 round trips; 66 miles of track would be required to be relaid. Even with that, there would be no increase in speed for the trip. The current speed is 30 minutes shorter than it was a 100 years ago.

Electrification would create a freight railroad system that is compatible and capable of supporting restored passenger rail services.
It has become apparent that the approach to restoring rail passenger service is disconnected from the fundamental difference from other world railroad systems: The American system is privately owned. It is FREIGHT. Freight is the distinguishing basis of the American railroad system.

Electrification means there would not be interference with the purpose of American railroads: FREIGHT. Electrification means compatibility and new opportunities. Whether restored rail passenger service in various corridors is a public or public - private partnership or conceivably a private investment; it is unlikely to happen without the private enterprise owners of the American railroad system being given sufficient incentives for the job. Frankly, the incentives must be dramatic and as such, must be, to get the job done. And, this is an economic incentive that needs to be done for its near term and future benefits.

How much would electrification cost? Using the estimates from Penn Design of the University of Pennsylvania’s 2010 study for creating a new 220 MPH capable high speed railroad from Boston to Washington, a rough estimate was $6 million a mile for two tracks. That estimate included catenary, substations, signals, motive power conversion, grade crossing upgrades and highway grade separation where needed. In comparison, the rule of thumb by PennDOT is that rebuilding a mile of interstate highway costs $10 million and building a new mile of interstate  averages $20 million.

Best of all, it would be a non-oil based transportation system prepared for an interruption to oil supply.
Posted by Samuel C. Walker at 6:22 PM No comments:

The study used 8900 completed questionaires and focus groups with 200 participants.

Conclusion was that there was adequate market demand for 180 mph rail service or 250 mph maglev service.

A couple of years ago a copy of the report was secured. Amazingly, there was no  consideration of the practicality for the construction of either services, rail or maglev.  The report did provide some maps showing in the broadest, most gross manner with simple lines of where such services might be constructed.

So, it is little wonder that the study found that should such service levels have had existed, there would be adequate market demand!?!

Maglev comment. Nice idea. Impractical. No large scale maglev system exists in the world as long as the distance from Pittsburgh to Philadelphia then or now. Even if a demonstrated long distance maglev system existed, its inherent defect would be that it stands alone. The only easy transition from a maglev type of transportation mode is the act of a passenger walking onto or off the maglev vehicle. The proven technology of high speed railroad systems allows for utilization of existing conventional rail lines into and out of city terminals.

Probably the most telling of the quality of the study was the group photograph of the commission. The members and staff look like a haphazard group of tourists visiting the 1906 Pennsylvania capital building. 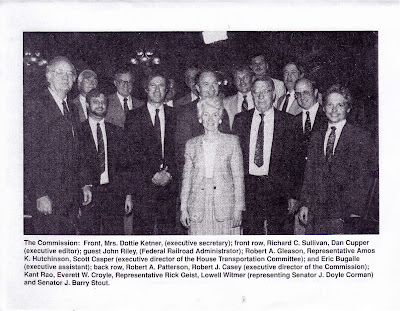 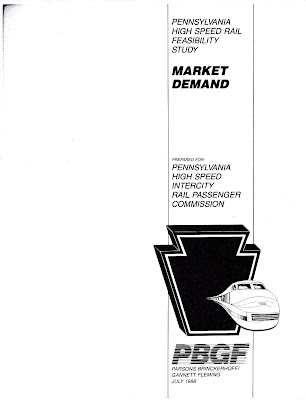 Posted by Samuel C. Walker at 5:28 PM No comments:

When will passenger rail service be restored to Pittsburgh to Harrisburg line? 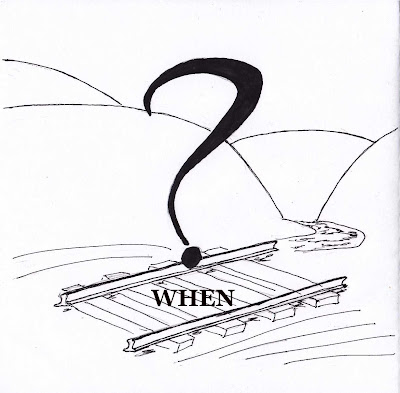 Posted by Samuel C. Walker at 4:58 PM No comments:

I have notes from ten year old data that I found several months ago. Now I cannot find the source of the notes. What is important though is that the notes show that for the city pairs of Pittsburgh to New York and Pittsburgh to Philadelphia the average number of passengers daily were 1504 and 775.

Would Pittsburgh - Harrisburg- Philadelphia - New York be near air competitive. Consider that with pendular suspended passenger equipment designed to cope with curvature at higher speeds than conventional passenger equipment, a Pittsburgh to Harrisburg schedule can be 4 hours from the current 5.5 hours. As the schedule from Harrisburg to New York is 2.5 hours, the new schedule would be 6.5 hours. That is near air competitive in time city center to city center.

In 1910 the PRR passenger trains were equipped with wooden cars and pulled by steam locomotives. 1910 saw the implementation of steel railroad cars as the Hudson River tunnels had been completed into Manhattan with the opening of Penn Station. Initially only trains entering the Hudson River tunnels would have been of steel construction. 1910 was the transition year from wood to steel. The highway system was largely unpaved. Few households owned automobiles. A robust electric trolley, interurban street railway system blanketed the USA and Pennsylvania. That robust system began to decline coincidentally with the success of the Ford Model T with the Great Depression finishing the once comprehensive trolley and interurban services. In Pennsylvania in 1911 there were 43,282 registered motor vehicles in Pennsylvania. By 1917 there were 349,720 registered motor vehicles in Pennsylvania delivering regional, county wide transportation. The PRR schedule from Pittsburgh to Harrisburg could be accomplished in 6.0 hours.

The high point number for daily passenger trains was reached in the 1950's. As the highway system was then paved. The momentum for creating a highway system began in 1903 with the establishment of the Highway Department. When young Captain Dwight David Eisenhower in 1919 was part of a truck capability demonstration from Washington, D.C. to San Francisco the Lincoln Highway, Route 30, across Pennsylvania was paved.  That was one of the few places in the United State with cross country pavement. The impetus of the average family acquiring an automobile begun in the decade of 1910 created the demand for paved roads. This set the competitive stage for private automobiles to replace the trolley and interurban companies.

In 1950 the passenger trains were, of course, all composed of steel passenger cars. The transition of of locomotive power from steam to diesel power was complete. There were some local services on the PRR still being operated with steam after 1950 such as the Long Branch, New Jersey service on which the last steam passenger locomotive in use was retired in 1956. That locomotive is currently in the custody of the Railroaders Memorial Museum at Altoona. The generation of steam power introduced after 1910 largely in the 1920's enabled a schedule of 5.0 hours by the later 1930's from Pittsburgh to Harrisburg. That schedule was lengthened during WWII due to the extraordinary demands made upon the railroad system.

The PRR passenger car fleet was essentially made up of equipment designed and built in the decade of 1910 and 1920 in 1950. From the late 1950's the PRR responded to highway competition by eliminating unprofitable passenger trains and saving operating costs by consolidating some trains. It would, for the most part, be that equipment from the 10's and 20's that the PRR would still be operating when the PRR became part of the Penn Central Railroad in 1968.  It was that fleet of equipment that was passed over to the Federal Amtrak system when it was created in 1971.

The current 2 trains a day now operated by Amtrak are on a 5.5 hour schedule. That service level is symbolic rather than presenting an alternative to the passenger car. It is certainly a pleasant ride in comparison to the ride experienced up until the late 70's. In the late 70's the line was relaid in welded
steel. The previous jointed rail line was noisy and had enough variations to create annoying vibrations. Equipment operated by Amtrak is far and away more comfortable than the famous all steel P70 passenger car design of 1910 ever was even with periodic refurbishment and updates. Together with welded rail current equipment is a pleasant experience.
Posted by Samuel C. Walker at 11:03 AM No comments:

Ninety six per cent of movement by people in the USA is done by passenger car.

For travel from Pittsburgh to Harrisburg  it is probably on the order of ninety nine per cent of passenger transportation is performed by automobile.


Passenger rail service creates a cost effective alternative to auto use.
Posted by Samuel C. Walker at 8:19 AM No comments: