Click on the image to enlarge. Information from Bombardier: 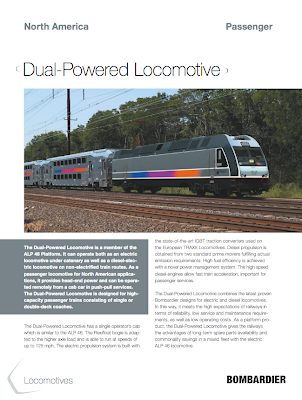 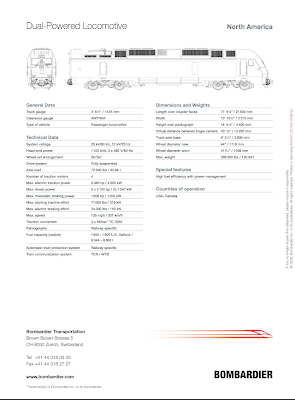 The ALP45DP is being built for application upon New Jersey Transit. Its an expensive locomotive. Its expense must be balanced in consideration of its probable useful service being mutiple decades long together with the economies inherent to straight electric operation together with the flexibility of operating beyond overhead wires in non-electrified territory as a diesel locomotive.
Ideally the American railroad system should be electrified. First, doing so would provide the nation with a non-oil dependent transportation system. This would be a new piece of armor in national defense.

For example, as the Pittsburgh to Harrisburg line might be electrified, as the electrification process proceeds, the dual mode locomotive could take advantage of electrified power for greater portions of the trip.
Posted by Samuel C. Walker at 3:08 PM