In the Spring 1999 of a periodical called THE KEYSTONE published by the Pennsylvania Railroad Historical and Technical Society an article appeared describing the "Samuel Rea Line." Samuel Rea retired from being the President of the Pennsylvania Railroad in 1925. His most famous engineering achievement was the construction of the Penn Station and tunnels at New York City completed in 1910. The article indicated that preliminary surveys for a railroad capable of 90 mph were supervised by Samuel Rea for the PRR Board in 1926. The dedicated passenger line was to leave the existing 90 mph mainline at Fort Wayne, Indiana and be built across Ohio and Pennsylvania connecting with the PRR mainline at Lewistown, Pennsylvania. It would have lessened the PRR distance from Chicago to New York City by 100 miles.

In an attempt to learn more about the basis for the article, an attempt was made to contact its author without success. Contact with the Hagley Museum at Wilmington, Delaware, and the Railroad Museum of Pennsylvania, Strasburg, Pennsylvania; major repositories for Pennsylvania Railroad archives, came up empty. The absence of more information about the basis for the article is probably due to a a fire at Philadelphia's Broad Street Station in 1943. Substantial volumes of PRR records stored there were destroyed in the fire. 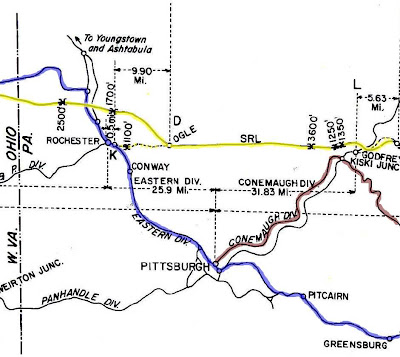 The yellow line represents the proposed Samuel Rea Line noted as SRL. The PRR mainline is shown in blue. The Conemaugh line from the Northside of Pittsburgh to Bolivar, Pennsylvania is shown in dark red / brown. Northwest of Pittsburgh, near Rochester, Pennsylvania a dotted line shows a new connection from the mainline to a place called Ogle for a connection with the Samuel Rea Line. Northeast of Pittsburgh near Kiski Junction across the Allegheny River from Freeport a dotted line shows where a proposed connection with the Connemaugh Division would have been made at a place called Godfrey, Pennsylvania. All tunnel locations have their length in feet indicated. 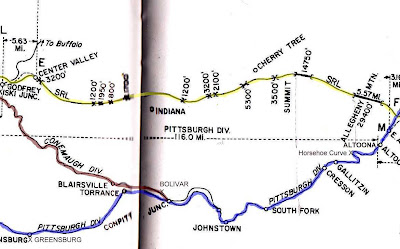 The Samuel Rea Line is shown in yellow.  The Allegheny summit would have been attained to the west of a large 14,750 foot tunnel that would have been built between Alburn and St. Lawrence, Pennsylvania. The mainline is in blue. The Conemaugh division is in dark red / brown. 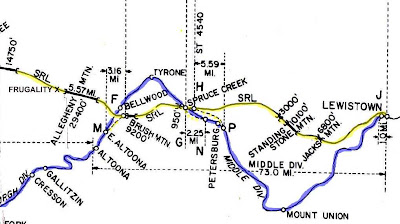 Had the Samuel Rea Line been built, it would not have had a grade exceeding 0.6 per cent. It would likely have been easily upgraded for 125 mph operation either by diesel locomotives or electric locomotives.

The proposed Samuel Rea line demonstrates that an actual High Speed Rail HSR across the Alleghenies would and require a substantial number of tunnels.