Clicking on the posted photographs on this blog will enlarge them.
In the upper right hand corner Norfolk Southern mainline tracks 1 and 2 are identified. The light colored area between the tracks are the fuel racks. Below them in the center of the photograph is another pair of tracks with fuel racks. There are a total of 12 freight locomotives in the photo. This is milepost 107.5
"The total annual million gross tons of traffic on tracks number 1 and number 2 .... is about 90 million gross tons...a substantial number of the movements is of expedited "double stack" container and trailer type intermodal service. Harrisburg is centrally located on the Norfolk Southern system where expedited  intermodal trains are refueled while stopped at a fueling station on tracks number one and number two....Some trains are over a mile long. Studies show that added passenger service at this location will delay intermodal trains as well as passenger trains." (See:  Page 272 of KEYSTONE WEST PASSENGER TRAIN STUDY, Volume 2 of 2, Prepared for: Norfolk Southern Corporation and PennDOT. Prepared by The Woodside Consulting Group, Inc. February 2005)
Should this be the first bottleneck eliminated in the process of  enabling restored passenger rail service Pittsburgh to Harrisburg? Adding a dedicated passenger track that bypasses the fuel racks is probably an important first step. What follows is a proposal from the 2005 Woodside study to add a track from the vicinity of milepost 105 to the vicinity of milepost 110.

This is the west end of the Harrisburg Amtrak Station. Seen is a passenger train positioned to be pushed to Philadelphia. The passenger service between Harrisburg and Philadelphia on the Keystone Corridor East is done by applying electrified push - pull equipment. Note the electric locomotive to the right edge of the photograph. Seen also is the opening for the Market Street underpass at Harrisburg.

The red brick building shown above designated as CP Harris is a preserved structure as its usefulness was for the historic signal and communications system installed by the PRR. The Woodside study proposed installing a number 15 turnout in this area to begin the passenger bypass track. Norfolk Southern tracks one and two are indicated by NS1 and NS2. The overhead viaduct is State Street in Harrisburg. 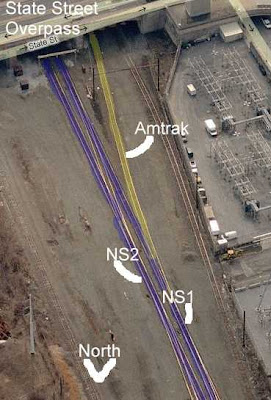 This photograph shows the convergence of the Amtrak ( yellow ) owned track with the Norfolk Southern ( blue ) owned track number 1 north of the State Street Overpass. Adequate room exists for a new passenger by pass track to the right. 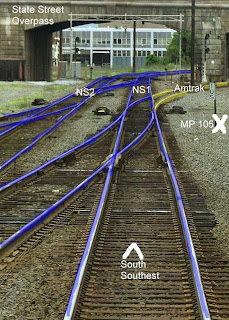 On the ground north of the State Street Overpass, milepost 105 is shown at the white X. The Norfolk Southern is in blue, Amtrak is in yellow. 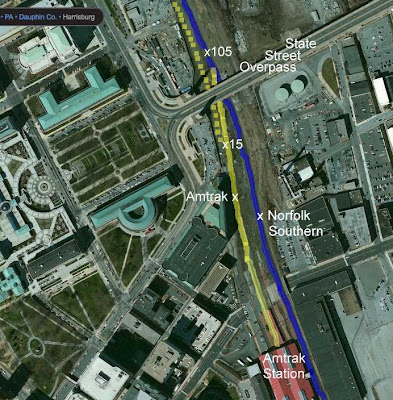 Here the Harrisburg Amtrak  Station is at the bottom of the photograph. 15 identifies the approximate location of a new turnout in the vicinity of CP Harris. 15 denotes where the passenger bypass track would begin. 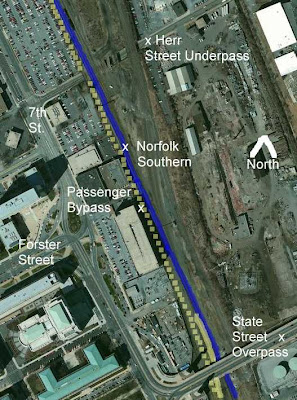 Adequate space exists for the passenger bypass to the left or west of the Norfolk Southern track one as shown. 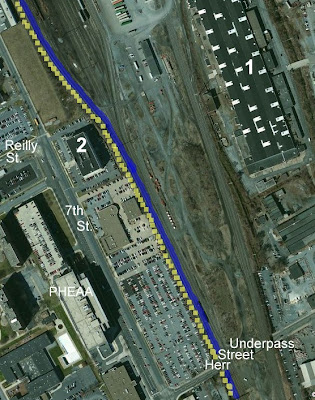 The top of the photograph is north. The proposed passenger bypass track is shown in yellow. Adequate room for the track exists. The industrial building designated with 1 is to give refernence to the next historical photograph. The building designated with a 2 is the Bertolino Building. Employees in the building have one of the best locations in Harrisburg to observe Norfolk Southern freight operations and Amtrak's daily Pennsylvanian passenger train. 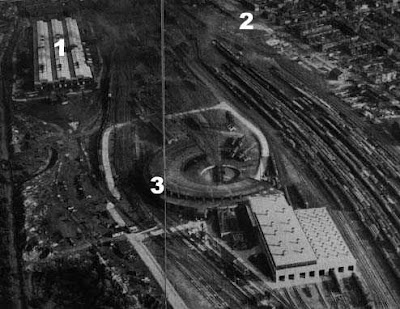 This low level oblique aerial photograph is looking south. It was made circa 1950 - 1952.  The industrial building on the preceding photograph is on the left and again designated with a number 1. The location of today's Bertolino building is designated with a 2. Where 3 is shown, the edge of a steam locomotive roundhouse is located. The rectangular light surfaced building in the lower right was a newly constructed diesel locomotive  maintenance facility. 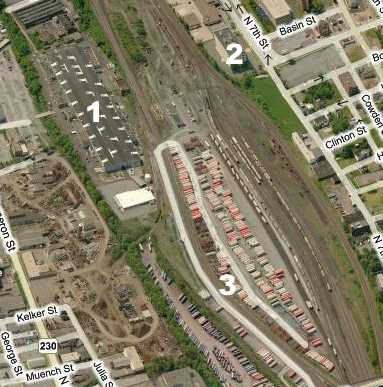 A similar view as to the 1950-1952 photograph above, looking south, this contemporary view courtesy of http://www.bing.com/maps/ shows that the industrial building continues to exist at number 1.
Today's Berolino Building is at number 2. The steam locomotive roundhouse and diesel locomotive maintenance no longer exist. They have been replaced by a staging area for intermodal freight containers and truck trailers designed  to be lifted onto freight rolling stock designed to carry the. 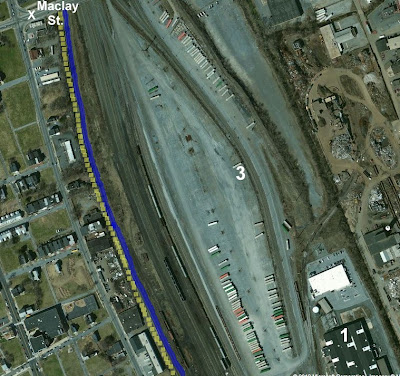 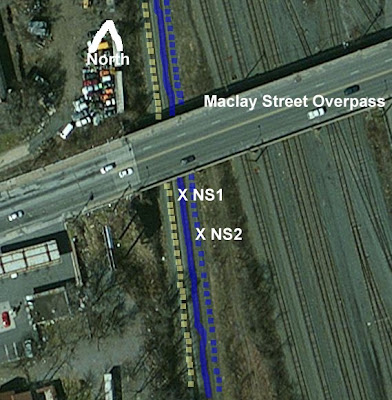 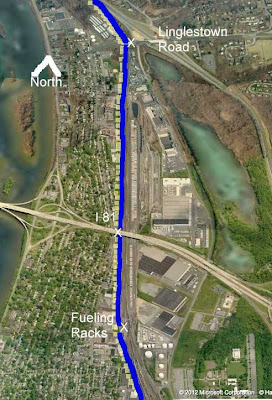 From Maclay Street north after the track shift required by the close clearance with the Maclay Street overpass, adequate space exists for the passenger track bypass. The construction of the passenger bypass will avoid interference with the fueling racks. Note the nearby storage tanks for diesel fuel. At I 81, another track shift is required to meet clearances. Then likewise at Linglestown Road, Route 38 overpass another track shit will be required. 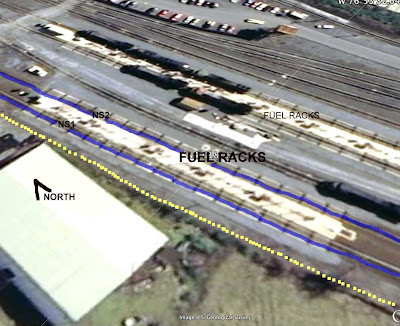 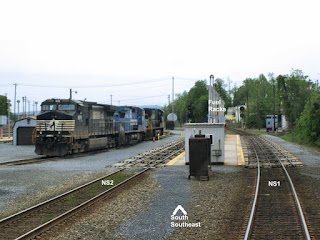 Another view of the fueling racks. 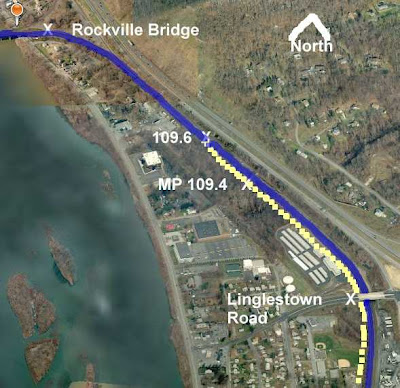 The passenger bypass track would end at milepost 109.6 south of the Rockville Bridge crossing the Susquehanna River 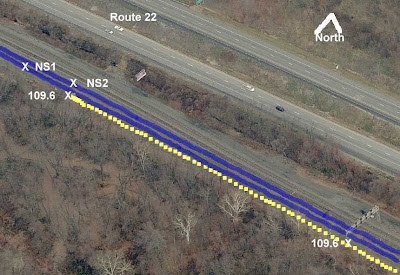 Here is a detailed photograph of the end of the passenger bypass track  ( yellow) at milepost 109.6. The other two tracks not in blue are also owned by the Norfolk Southern. Those tracks follow the Susquehanna River north to Northumberland, Pennsylvania. There connections are made via another railroad to Binghamton, New York to the Northeast of Northumberland. To the Northwest of Northumberland the Norfolk and Southern continues to Emporium, Pennsylvania where a connection is made with another railroad to Buffalo, New York. Of course, NS1 and NS2 are the east - west tracks to Pittsburgh across the Keystone Corridor West. 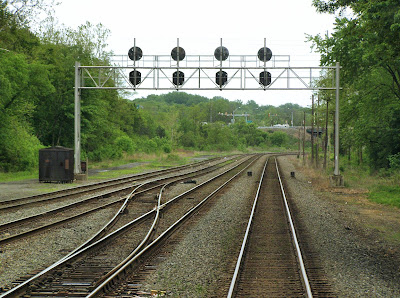 Looking southerly on NS1 toward the signal located at milepost 109.4. The passenger bypass track would be  to the right. The bridge supporting the signals would have to be widened. The bypass track would end behind the photographers position in the vicinity of milepost 109.6. The view is looking towards the Linglestown Road Route 38 overpass in the distance.
Posted by Samuel C. Walker at 4:15 PM